“The Jones Men”: From Novel to Screenplay to Stage…Movie? 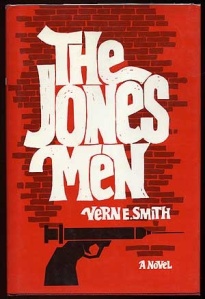 Original Cover of “The Jones Men” circa 1974

When I first suggested to my editors at Newsweek that we take a look at the devastating  impact of heroin on Detroit’s urban landscape back in the early 70s, I knew it was a subject that would draw attention. But I could not have fathomed that I would turn the essence of my reporting  into a novel, “The Jones Men,” or that sometime after that a determined producer–and Detroit native–Woodie King Jr.–would convince me to write a screenplay  based on the book.

Screenwriting is something I’d had an interest in since college, seeing it as a different kind  of narrative storytelling. After a series of drafts and rewrites, I completed the version of the story I’d like to see as a film, and moved on to other orojects.

Over the years, Woodie would  share his attempts to set up a production on the script from time to time.  I admired his tenacity and belief in  my work , but..

We hadn’t discussed the movie idea in more than five years, when  a month ago I received an e-mail from  Woodie that was  short, sweet and surprising: “I’m doing a staged reading of your screenplay  with about 20-25 actors.”

I watched rehearsals today for Sunday’s special staged reading of that screenplay at the Castillo Theater on 42nd Street in the heart of New York’s Theater district, marveling at the staying power of a piece of writing, and one man’s dogged belief in it. 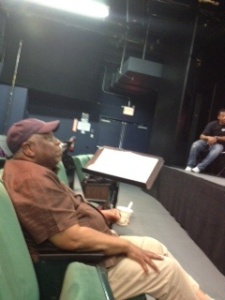 Needless to say, it was a thrill ride to hear your dialogue uttered by the likes of veteran film and stage actor Anthony Chisholm, described by Woodie as “August Wilson’s go-to guy.”

As the driving force behind New York’s New Federal Theatre, (NFT) Woodie has helped launch the careers of some of the most famous faces in the movies, as well as nurturing writers like playwright Ntozake Shange (“For Colored Girls Who Have Considered Suicide When the Rainbow was Enuff.)  The NFT special play reading series, sponsored by the Gurfein-Merine Family is named for Shange. “The Jones Men” cast of 24 is the largest in the Reading Series.  Several of the actors flew in from Los Angles on Woodie’s call, and one more joined them tonight after completing a film out west: Jamie Hector, memorable for the role of Marlo Stanfield in HBO’s “The Wire,” will read the part of Lennie Jack, the main character in my story.

Will a “The Jones Men” film ultimately be produced?  “Timing is everything,” as Ralph McCain, the actor who does such an outstanding job with the character called Goattee. told me I Hope  he’s right, but the journey so far has its own reward.

4 thoughts on ““The Jones Men”: From Novel to Screenplay to Stage…Movie?”